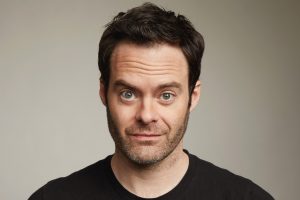 Bill Hader is a popular actor, comedian writer and producer from the American entertainment industry and Hollywood.

Bill Hader is most recognized for his long stint with the popular ‘Saturday Night Live’ comedy show, and later appeared in several other popular TV shows and movies.

Bill Hader is a talented artist and has also provided voice overs to various popular TV characters till date, winning several awards and getting numerous award nominations in his career.

Bill Hader is one of the most popular comedian actors in the Hollywood movie industry and the American television and entertainment industry today. Bill Hader is renowned for his impressive, straight-faced dialogue delivery style which makes him a huge hit among movie and TV audiences worldwide.

Bill Hader’s father was William Thomas Hader, who was a restaurant manager, truck driver and often performed as a stand-up comedian, while Bill Hader’s mother was Sherri Renee Patton Hader, who was a dance teacher by profession. Although Bill Hader does not have any brothers, Bill Hader’s younger sisters include Katie Hader and Kara Hader. Bill Hader’s ex-wife is Maggie Carey, a renowned writer and producer in American TV industry, whom he was married to from 2006 to their divorce in June of 2018, for almost 12 years. Bill Hader and his ex-wife Maggie Carey have three lovely daughters – Hannah Kathryn, Harper Hader and Hayley Clementine.

Thanks to his success as a writer, comedian and actor in the Hollywood movie industry and American entertainment industry, Bill Hader’s net worth is estimated around INR 57 crores (USD 8 Million).

As for the recognition for his impressive comic and acting skills, Bill Hader has won several awards and has had numerous award nominations to his credit as well.

Apart from having won these 4 awards Bill Hader has also had around 17 award nominations as well.